Putting Plastic Pots in the Recycling Bin? Not so fast!

By Jo Anna Natale, Fairfax Master Gardener
As gardeners, we probably all have piles of plastic nursery pots cluttering our basements or garages. The question is, what do we do with them? 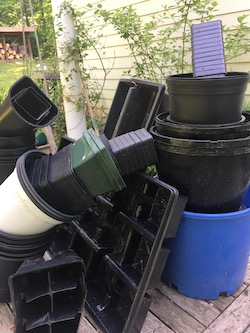 For years, the answer for me was easy: Reuse what I can, then put the rest in the recycling bin and feel good about the many “green” aspects of my gardening hobby. I recently learned, however, that plastic pots are not recyclable in the single-stream recycling process used in Fairfax County, Va. I was shocked and embarrassed at having been an unwitting “wish-cycler”–that is, someone who puts stuff in the recycling bin, trusting it will all get, well, recycled.

Turns out, plenty of other people get this wrong, too, partially because of confusion about what the recycling codes stamped on the bottom of plastics actually mean. “The code numbers and accompanying recycling symbol do not communicate recyclability. Rather, they indicate the type of resin that was used to make the package,” says Christine McCoy, a management analyst with Fairfax County’s Solid Waste Management program.

Products made with certain resins—those stamped with the codes three through seven—are not easily or affordably recycled here, McCoy says. (Plastic pots are usually fives and sixes.) But these don’t necessarily languish in the landfill. Instead, McCoy says, Fairfax County combusts them, generating electricity. It then sells the electricity to power companies that, in turn, sell it to consumers.

What happens to plastic pots (and other non-recyclables) that do erroneously wind up in the recycling bin? Under our single-stream recycling system, if they successfully get identified and separated out as trash, they may end up combusted and converted into electricity. If they don’t, they could contaminate other bonafide recyclables and waste the whole bunch.

Single-stream pros and cons
Single-stream recycling systems are supposed to encourage recycling by making it easy. It works like this: Customers place all would-be recyclables—whether plastic, paper, cardboard or aluminum—into curbside recycling bins. The job of separating the recyclables occurs at facilities that employ sophisticated scanners and workers who physically sort the items.

But while convenient, single-stream systems aren’t perfect. One issue is the problem of people putting non-recyclables into the bin. When scanning machines or workers miss those items, they mix with viable recyclables, essentially polluting them and downgrading the whole load to trash.

Another difficulty: What qualifies as acceptable recyclables can shift with market conditions. According to McCoy, in the past, some 30 t