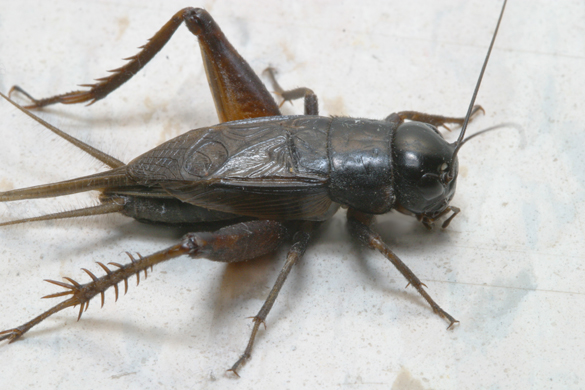 Crickets are thought of as a symbol of good luck in several cultures. The Chinese saw them as bringing happiness and good fortune, and often kept them in cages to appreciate their songs. Native Americans considered them good luck, representing wisdom, joy and power of belief. Their jumping offered the power to leap over difficult obstacles. American Colonial builders added a copper cricket to the weathervane atop Boston’s Fanueil Hall as a symbol of prosperity and protection. We consider them a nuisance pest. They are not so much good luck when they get into our homes. 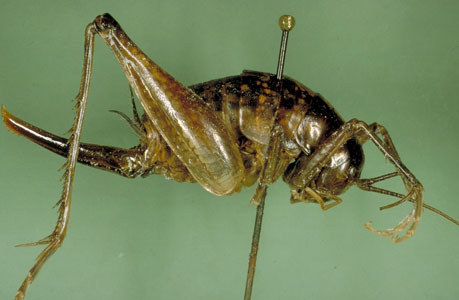 Crickets are part of the Orthoptera family along with grasshoppers and katydids. There are three types found in our area — the house cricket, camel cricket and most common, the field cricket. House crickets can live and reproduce indoors. They are light brown with darker bands on their heads, and when outdoors, can cause damage to garden plants and flowers. Camel crickets get their name from their downward-facing heads, making their backs higher similar to a camel’s hump. They are brown-colored with long antennae and long hind legs. They do not chirp.

The field or black cricket (Gryllus assimilis complex) is what we mostly see outdoors at this time of year. Males use their wings to create the chirping sound in order to attract mates. Their upper and lower wings have rough-ridged surfaces and when rubbed together, create the chirping noise we are familiar with. The warmer the temperature, the faster they chirp, and the higher the sound pitch is. It is reported that you can tell the temperature by counting the number of chirps in a 15-second interval and adding 37. 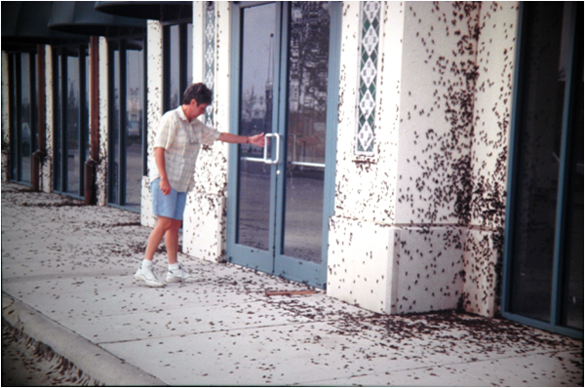 Crickets are primarily an outdoor insect. They hatch in spring from eggs laid in the soil in the fall and take about three months to complete their development into adults. They are most noticeable in late summer and early fall as populations build and they reach maturity. There may be large outbreaks in southern states in late summer when their populations can soar. The largest outbreaks seem to occur in periods of dry spring and summer, probably because wet conditions encourage fungal disease among eggs.

As weather cools, crickets will seek shelter in warmer areas such as in buildings where they are unwanted. They can become an agricultural pest in spring, as some subspecies cause damage to seedlings and transplants, feeding on leaves at night and leaving holes in leaves. They get into our homes by entering through cracks, holes and crevices in the foundation. Sometimes they hide in cracks at door thresholds and then leap indoors when the door is opened. Buildings that are brightly-lit tend to attract crickets at night, and they gather at buildings under doors at well-lit entryways.

Crickets mainly feed on dead and dying insects, seeds, fruit and other outdoor debris. They can damage garden plants and flowers, too. Inside, they can eat fabric, paper, wool and other common materials. Clothes are more attractive when unwashed and contain perspiration and body oils. Once inside, they can last several weeks as long as there is food.

For control, it is best to prevent them from coming into our homes by keeping them away. Seal up cracks around windows, doors, and foundations, and remove dead leaves and debris from around foundations and doors to eliminate hiding places. We can also encourage them to stay them away from the house. Keep odors from garbage cans to a minimum with lids or empty them frequently. Reduce damp areas near the house by improving drainage. Keep firewood stored outdoors at least several feet away from the house to minimize nearby hiding places. Firm, bare soil areas are preferred locations to lay eggs in the fall, so tillage reduces cricket populations in the spring by destroying their overwintering eggs.

Once inside, crickets can be more difficult to eliminate. Vacuum cleaners can be very effective in collecting them for disposal. Cats are entertained and are effective in catching the hopping menace. They can also be controlled with insecticidal baits and sprays. Baits use granules that contain food for them and usually also contain metaldehyde, carbaryl, propoxur or hydramethylnon. Don’t reach for the indoor sprays because they are very ineffective for controlling mature crickets.

This fall, when you hear the chirping of a cricket in your home, remember that they are usually not very destructive. Consider it your good luck as our ancestors did.