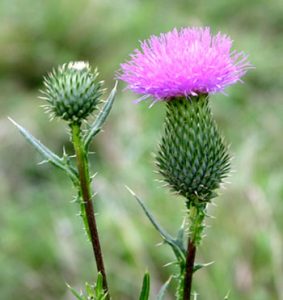 I first became familiar with Canada thistle when I was a community gardener in Maryland and again here in Fairfax County, Virginia. Canada thistle seems to grow in the farmlands and natural areas that eventually become the places for parks and gardens. Yesterday I found it growing wild in the area next to the local dog park, which is also where my garden is located. A large area of thistle is growing 3 feet tall there along the edge of the woods, still flowering but beginning to decline.

In the garden, thistle is sprouting along the edge of the garden plots. When we planted our vegetables, there were thistle seedlings poking out of our landscape fabric in several places inside our fence. I wanted to pull them out, but when I tried they were prickly, and I was stabbed by the spines on their leaves. I knew from the beginning that this weed was going to fight with a vengeance to stay.

Canada thistle (Cirsium arvense) is an invasive perennial weed from the Sunflower family (Asteraceae). It arrived in the United States from Eurasia in the 1600s, probably coming here in crop seed shipments. By 1954, this noxious weed had become a problem in the natural areas of 43 states. It can be found throughout Canada and the northern United States, from northern California to Maine and south to Virginia. 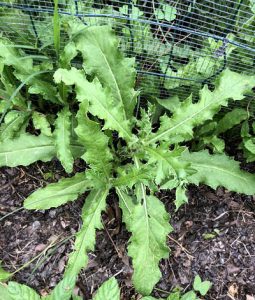 Leaves of the Canada thistle are alternate on the stem, simple, and oblong- to lanceolate-shaped. Young seedlings are covered with short hairs and are a dull green and become a dark green when they mature. There are spines on the leaf margins of both the seedlings and mature plants. The flowers and stems are spineless.

Reproduction occurs in two ways. Its creeping rhizomes extend horizontally and vertically as far as 3-1/2 feet from the original plant, and the rhizomes frequently sprout dense patches of seedlings that look like small rosettes. Its flowers also produce seeds, nearly 1,000 per flowering shoot. The disk-shaped lave