By Pat Dickey, Fairfax Master Gardener
Spider mites are one of the most prolific feeders in our gardens, puncturing leaves and sucking sap from all types of plants – vegetables, ornamental trees and shrubs, annuals and perennials, fruit trees and brambles, and even houseplants. Even though we think of them as bugs or insects, they are neither of these. Spider mites are arachnids and relatives of spiders, daddy long legs and ticks. They are from the family Tetranychidae with 1,200 species. 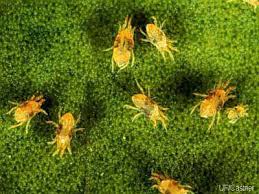 No larger than the period on a printed page, a spider mite can best be seen with a hand magnifier. Its life cycle begins when eggs are laid singly on the underside of leaves and occasionally on the top. The eggs develop into larvae, and those of the first instar are tiny and pale in color with spherical bodies and three pairs of legs. The older nymphs in the next two instars are red or green with four pairs of legs. Spider mite adults are eight-legged and oval with coloring of yellow, green, red, or brown. The body of an adult spider mite is one continuous oval, unlike the head, thorax and abdomen of an insect. Spider mites also lack wings, antennae and compound eyes. There are multiple generations each year, and their life span is 5 to 21 days.

The tell-tale sign that spider mites are feeding on your plants is the fine, silk webbing that they spin on the leaves and branches. Other signs of the presence of spider mites are the stippling of leaves from the punctures they make while feeding. These tiny white markings are from the pair of needle-like structures called stylets that the spider mite uses to pierce cells on the underside of leaves and draw out sap. As small areas of cells are killed, the upper surfaces of leaves begin to have a “sandblasted” appearance and become bronzed, bleached, yellow or gray.

Spider mites will populate in large numbers and can cause severe damage to plants, even death, if not treated. They feed on conifers and broad-leaved evergreens primarily in the cool weather of spring and fall. For control, a dormant oil application is recommended. In the summer, use insecticidal soap. Certain lady beetles, thrips and predacious mites offer some natural control for spider mites. It is not recommended that insecticides be freely sprayed, because that would endanger these beneficials. Often, insecticides are not effective in controlling spider mites.

There are other ways of preventing spider mite infestations. Keep your plants watered in dry weather conditions. Spider mites are usually first seen along the edge of paths and landscape beds where it is the driest. Avoid using nitrogen fertilizer excessively, which increases spider mite populations. If spider mites are beginning to appear on your plants, hose off the undersides of leaves with water to dislodge them. In the vegetable garden, use floating row covers along with insecticidal soap to keep spider mites under control. In the fall, clean up weeds and other debris where spider mites could overwinter.

Spider mites can infest indoor plants all year long, and they have a very broad host range. Wash your houseplants periodically with sprays of water, especially under leaf surfaces. Higher humidity in your home will also help to reduce the incidence of spider mites. Insecticidal soap application is recommended if their population increases. When using chemical insecticides, bring houseplants outdoors to spray them where there is proper ventilation. Make sure you read the label, and check if your plant is listed for that product. It may be best to dispose of houseplants that are heavily infested.

Two Spotted Spider Mites (Tetranychus urticae) are a warm season species and are semi-dormant in the winter. They feed on more host plants than any other spider mite in the world. They begin the season by feeding on weeds and herbaceous perennials. These include phlox, hollyhock, primrose, violet, and rose. As the weather becomes warmer, many annuals are their host plants, such as marigold and impatiens. They also feed on garden vegetables in the warm season, including bean, tomato, cucurbits (cucumber, squash and melons), beet, carrot, corn, eggplant, parsley, pea, pepper and sweet potato. They also infest strawberry, blackberry, raspberry, and many fruit trees. Two Spotted Spider Mites are also the most common mite pest of houseplants. To identify them, they have two dark spots that resemble saddle bags that can be seen through their pale green bodies. 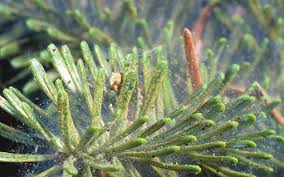 Spruce Spider Mites (Oligonychus ununguis) are a cool season species and feed on most conifers, especially spruce, hemlock, arborvitae, fir, juniper and occasionally pine. They can be found on Fraser firs that are grown as Christmas trees. Peak feeding injury occurs in late spring and fall, and the damage to the plants intensifies in the hot summer months. They spend the winter in the egg stage on the bark of branches, near the base of needles, and around buds. They hatch mid-spring and begin feeding on the older needles in the plant’s interior, later moving to newer growth. Adults are dark greenish-black or dark red. Their identifying marking is a single dark area that covers most of the abdomen. 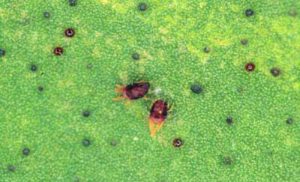 Southern Red Mites (Oligonychus ilicis) are important spider mite pests of broad-leaved evergreens, such as Japanese holly, azalea, camellia, laurel, rhododendron, other hollies and boxwood. This is also a cool season variety, most active in the spring and fall. They begin winter as red eggs on the underside of foliage. The nymphs and adults are dark reddish-brown. Southern Red Mites do not spin silk webbing.