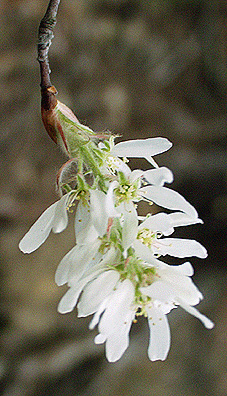 If you chose Downy Serviceberry (Amelanchier arborea), you are correct. I became familiar with this tree when three were planted outside the front of the school where I worked several years ago. I can attest to the serviceberry’s showy white flowers and its delicious fruit. Teachers and children alike enjoyed sampling the ripe berries when in front of the school in their carpools. The fruit is similar to blueberries, though a little sweeter, and is prized by both birds and people. It is said that the berries make a delicious pie or jam, if you are lucky to pick enough before the birds get them. I’ve often wondered why I don’t see more serviceberries planted in people’s yards. In fact, the serviceberry is on my list of trees to plant in my yard. Hopefully, by the end of this article, you will want to plant one, too.

A member of the rose family (Rosaceae), this native tree is found in eastern and midwestern forests from Maine to Iowa and south to northern Florida and Louisiana in full sun to partial shade. It generally grows from 15 to 25 feet high, though it can grow to 40 feet or higher. It also grows as a large, multi-stemmed shrub. Adaptable to a range of sites, it can be found growing in swampy lowlands to dry woods as well as rocky ridges and open woodlands. It can also grow in acid to high pH soils, moist to dry. 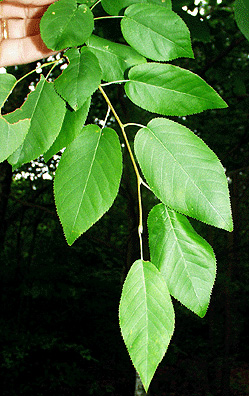 The 1- to 3-inch long leaves of the downy serviceberry are alternate, simple and ovate with serrate margins. The “downy” in its name refers to the fact that the new leaves are covered with many hairs. The leaves turn vivid shades of yellow, apricot and red in the fall. The smooth gray bark, becoming ridged and furrowed with maturity, offers winter interest.

Though short-lived, the bright white flowers that appear in mid-March to April in drooping racemes or clusters 2 to 4 inches long steal the show. Appearing early, either just before or with the leaves, the