The importance of native species 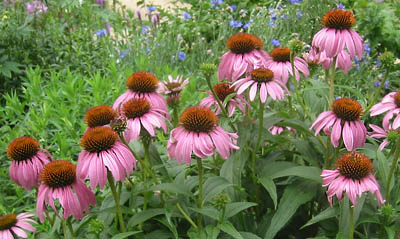 By Ray Novitske, Fairfax Master Gardener
Pick up any magazine today or listen to any broadcast about gardening and the environment, and you are likely to encounter the term, native species. Many gardeners are turning to native species these days, not to jump on the latest media bandwagon, but because natives make good environmental sense.

Definitions of the native species can vary. Some define natives as plants that were growing on our continent before Europeans arrived with new species. Others more strictly define natives as species that have evolved on their own without human involvement in a particular region. For example corn, which was brought from Central and South America, would not be native to North America, even though it was cultivated here before Columbus. Camassia that originally grew wild in our Pacific northwest is sold as a native species, but by the latter definition, would not be a native here in Virginia.

Natives have several advantages over cultivated or introduced species. Natives have evolved over millennia to grow and thrive in the soil, rainfall, nutrients, and wildlife found in a particular region. Virginia native species find a home in our hot, humid summers, receiving intermittent rainfall and tolerating the clay soil because they evolved to do so over thousands of years. Many tropical an