By Pat Dickey, Fairfax Master Gardener
While walking in wooded areas in the winter, with no foliage on most of the trees, you may see mysterious growths and shapes that you have never seen before. Some appear crusty and grow on the top of rocks and on stone artifacts. Others seem to be growing beards and hanging on the sides of trees. There are also those that form leafy grayish-green shapes and appear on trees and on the ground. What are they? Will they harm the trees? 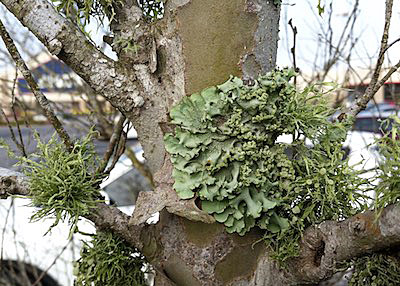 Lichens together on trunk

You are seeing a unique relationship between a fungus and an alga that allows them to mutually benefit from each other. The fungus provides a place for the alga to live, with moisture retention and a surface on which to grow. The alga provides nutrients for the fungus through photosynthesis. The two have formed a symbiotic relationship, and together are known as a lichen. 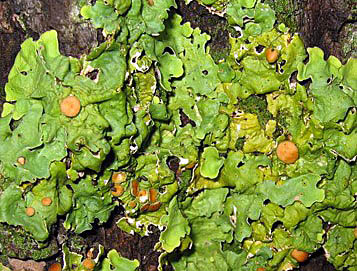 A lichen (pronounced liken) does not have a stem or leaf or a vascular system and therefore is defined as a thallus structure. In this relationship, the lichen does not resemble either the fungus or the alga. The dominant part of the lichen is the fungus. Everything needed from the lichen’s environment, from the air and rain, is absorbed into its structure. Lichens often are found near moss on trees and on soil, because they absorb water from moss as well. A lichen does not have a waxy, protective layer like a plant leaf and grows very slowly, up to 3/4 inch a year. It begins to grow when sunlight is able to reach it, when surrounding trees are without their leaves.

There are four types of lichens: 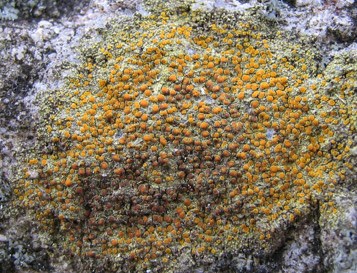 The beneficial relationship of lichens provides a mode of survival for algae in harsh environments where they would not normally survive. This enables algae to live all over the world as long as there are occasional rain showers to allow the lichens to recharge and store food for the next dry period. Lichens have little control over the water that is gained or lost. They can fortunately tolerate periods of severe desiccation, entering into a metabolic suspension in which biochemical activity stops.

Lichens are sensitive to poor air quality. They absorb pollutants from heavy metals, carbon or sulfur dioxide, allowing scientists to extract these toxins and study their levels. Lichens also contribute nitrogen and minerals to their ecosystems, and scientists can detect serious changes in ecosystem health from them. 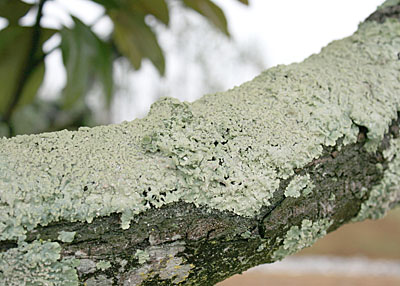 Lichens are a food source for caribou in the colder climates of North America. They make up 90 percent of the caribou’s diet in the winter and 50 percent in the summer. Hummingbirds use lichens for their nests, camouflaging their nests from predators. Caterpillars of a particular species of nocturnal moth, Noctuidae (owlet moths), feed on lichens.

A way to remember the symbiotic relationship of a fungus and an alga is this riddle: “Did you hear the story of a fungus meeting an alga and they took a lichen to each other?” There is no need to remove lichens from your trees, since they will not cause any harm. Even though they look like something from another world, lichens are our friends for sure.