By Ann M. Mason, Fairfax Master Gardener Intern
I have mystery plants. One is actually a grove of deciduous, semi-evergreen shrubs in my shady back yard. Is this shrub one to keep or one of those invasive plants I need to address? The other plant is a woody vine stealthily stretching over the ground and climbing trees and shrubs to form a tight girdling grip on neighboring shrubs and plants. This vine is not the creeping five-leafed Virginia Creeper (Parthenocissus quinquefolia). So, what are these plants?

Turns out, these two mystery plants are in a related family — honeysuckles — one is a bush honeysuckle and the other the persistently invasive woody vine, Japanese honeysuckle (Lonicera japonica).
In my yard, the bush honeysuckle shrubs stand between 4 to 15 feet tall and have long branches with opposite, elliptical leaves. In the fall, these semi-evergreen shrubs have bright red berries that attract birds. Birds eat the fruit and deposit the seeds, which actively grow in most soils and light conditions. In the mid to late 19th century, bush honeysuckles were imported, without their natural biological control partners, as ornamentals for erosion control and wildlife cover. While gardeners in northern and central Virginia might be attracted to their semi-evergreen nature, bush honeysuckles are easily spread by bird droppings and by their bad habit of sending out suckers to overtake and invade habitats. Some species are known to release chemicals into the soil that inhibit the nearby growth of other plant species. 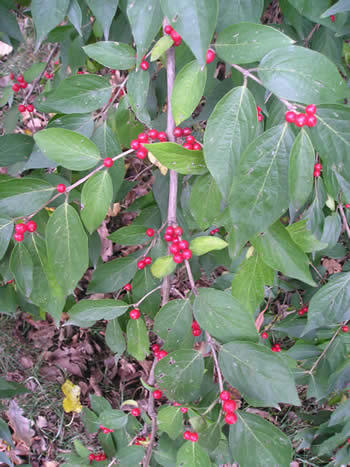 Jack, of the Beanstalk fame, might have used the woody Japanese honeysuckle to reach the giant. This evergreen woody vine can grow up to 2 inches in diameter, 80 feet long, and entwine up trees, bushes, and plantings of any size with a constrictor-like grip. I let down my guard and discovered a vine 1.5 inches in diameter encircling and, in some places, so constricting the trunk of a small, 12-foot American hornbeam (Carpinus caroliniana) that it embedded itself into the bark. It took me a good 15 minutes to cut away as much of the woody vine as I could.

It will come as no surprise to the reader that I have been on a multi-year campaign to control these plants in my shady yard — both the invasive bush honeysuckle and the vine. I have tried digging but removing all of the roots that are tangled with the surface, fibrous roots of mature hickory, oak and other plants affords me little success. Without the ability to remove all of the roots, Virginia Tech recommends as the next level of control two cuts to the honeysuckle — one in the spring and the second in the late summer or early fall when the plant is transporting its nutrients downward to the roots. Using a brush, sponge or other similar applicator, the gardener applies the herbicide directly to the cut stump or vine late in the growing season. This targeted application allows the systemic herbicide to act upon, and hopefully kill the roots of, the honeysuckle without endangering adjacent plantings or the surface roots of trees in the area. Timing is key. Application during the winter is not effective and cutting might spur the honeysuckle to re-sprout vigorously. As with all chemical treatments, gardeners need to read and follow the label precautions and instructions on the herbicide.

Since these are persistent plants, gardeners like me, trying to manage and eradicate these invasive plants from my garden, face three to five years to gain control.

So, with the advent of fall-like temperatures, you will find me in the yard continuing my battle against these two invasive honeysuckles. Wish me luck!