By Jo Anna Natale, Fairfax Master Gardener
Trees aren’t the only woody creatures that dress for the party come fall. Shrubs want in, too, and perhaps no shrub puts on its autumn brilliance better than the fothergilla bush.

Fother who? It’s a strange name, to be sure, sounding something like a paternal, poisonous lizard. But odd name aside, fothergilla is a deciduous shrub worth welcoming, whether you are a fall foliage fan or just someone seeking an attractive, nearly maintenance-free bush for your yard. 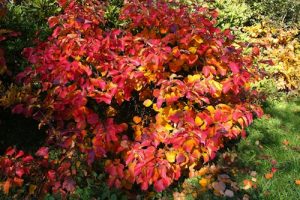 Sometimes called witch alder, fothergilla is a member of the witch hazel family (Hamamelidaceae). High in its favor: It is a deer-resistant native in the Eastern United States, and its flowers are a springtime magnet for pollinators.

But what hooks us humans in most is fothergilla’s seasonal beauty. Starting in October and lasting until November, its leaves take on the colors of a spectacular sunset, turning deep orange, red, burgundy and yellow — with all those colors often apparent simultaneously.

Its other showy season is spring. In early April, well before the bush leafs out, a profusion of 1- to 3-inch-long, fluffy bottlebrush flowers emerge. (These flowers are actually creamy-white stamens, with prominent greenish-yellow anthers.) The blooms typically last two to three weeks, gracing open, zig-zagging branches. In the colder months, its artful structure, bare of any foliage or flowers, creates interest in the winter garden, too.

During summer, fothergilla is pleasing enough. Depending on the cultivar and the conditions, the toothy-edged, roughly 3-inch leaves that cover the bush can be green to blue-green and rounded to oval. But summer is when fothergilla settles into the background, letting other shrubs and flowers sing, while it prepares for the fall fiesta ahead.

Fothergilla’s owes its curious name to John Fothergill, an 18th-century English physician and plant collector who financed plant-finding expeditions to North America. There are two notable species in the genus: Fothergilla major and Fothergilla gardenii. They share many characteristics, with the biggest differences in their size and some of their cultural requirements.

F. major, also known as mountain fothergilla, grows 6 to 12 feet high and 6 to 10 feet in width. Its leaves are asymmetric at the base and nearly round. It grows in zones 4 to 8 and prefers partial shade and acidic, moist soils.

The tidier species, F. gardenii – or dwarf or coastal fothergilla — grows just 3 to 4 feet tall in a more mounded form. A bit less showy than F. major, both in flower and fall color, F. gardenii puts on its best display in full sun. Its leaves are symmetric at the base and oval in shape. It grows in zones 5 to 8 and requires moist, well-drained, acidic soil.

As a rule, fothergilla doesn’t attract much, if any, attention from deer and rabbits, which makes it all the more appealing as a landscape plant. Luckily, troublesome insects tend to pass it by, too. Pollinators, on the other hand, adore the shrub, with bees and hummingbirds flocking to its spring flowers because of the blooms’ slight honey scent.

Only a few things about fothergilla might bother. Suckers can be a small nuisance, with F. gardenii tending to sucker more than F. major. However, you can easily remove and discard suckers to keep outward spread in check — or better yet, you can pot them and create additional shrubs.

Also, fothergilla doesn’t take well to gardeners who prefer to prune severely. Part of the charm of this slow-grower lies in its free-range branching – meaning, pruning should be minimal and selective, at best, and gently done just after the shrub flowers.

Newly-planted fothergilla should be watered regularly. Once established, the shrubs shouldn’t require any supplemental watering, as long as they have a 2-inch layer of mulch to help conserve moisture. 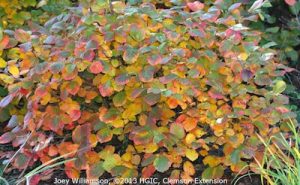 One of the cultivars widely available in nurseries is fothergilla x intermedia ‘Mount Airy,’ which is a naturally occurring hybrid of F. major and F. gardenii. ‘Mount Airy’ bests its parents for fall color and bloom size, grows to a moderate 5-foot height and width, and adopts an easy-going attitude in the garden, putting up with a range of soils and orientations.

Whichever species or cultivar you choose, odds are you’ll be glad to have a fothergilla in fall seasons and most especially during the one we are enjoying now.