Weeds: If You Can’t Beat Them, Then Eat Them 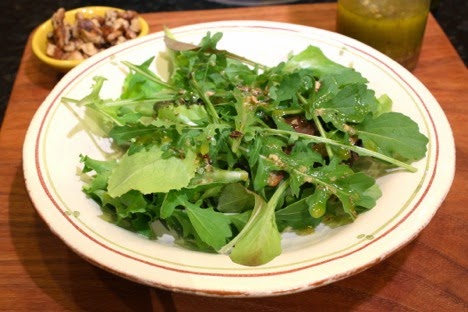 Do you find yourself at mealtime preparing the same old recipes, and are you tired of cooking the same foods over and over? Are you looking for some new, exciting and delicious side dishes to add to your meals? Then look no further than your backyard and stop fighting the endless battle with weeds.

Some gardeners see weeds as an impossible, unbearable nuisance and an overwhelming enemy in the garden, all of which means that complete annihilation must take place. Some gardeners believe that weeds are pests that need to be removed from their well-organized gardens. For me, the idea of a weed free garden or yard is to dream the impossible dream.

Before you attempt to remove them with your hoe or hands, some of those weeds might make a delicious addition to your next meal. Some weeds are full of nutritional value and contain vitamins, minerals and fiber. Some plants are poisonous, and it is advisable not to eat plants unless you know that they are edible. Also some parts of a plant may be edible but not the entire plant. Young, tender edible weeds are less bitter than mature ones. Caution: Do not eat plants that are in an area that has been sprayed, or near roads where vehicle exhaust can be left on them, both of which could be toxic. 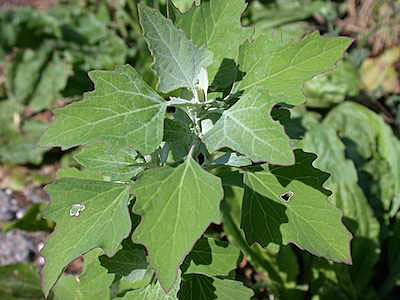 Lambsquarter (Chenopodium album) has diamond-shaped leaves with jagged edges and white coarse particles under the leaves. The stems are green and may have red streaks. Known as wild spinach, it contains iron, protein and vitamin B2. The young leaves and stems can be used in salads or as a substitute for cooked spinach. It is more nutritious than raw cabbage or spinach.

Chickweed (Stellaria media) grows in a mat shape and has small teardrop leaves with white hairs and small white flowers with five petals. The leaves taste like spinach and are good on salads. The young shoots and tender tips can be eaten cooked, raw or dried for tea. Chickweed is best harvested when the flowers are in bloom. It contains iron and is used as medicine.

Dandelion (Taraxacum officinale) has yellow flowers and young, tender raw leaves that may be used in salads or dried for tea. It is best to harvest the tender leaves before the flowers bloom. The leaves contain vitamins A, C and iron. When the leaves are larger, it is best to cook them. If the greens are bitter, then change the water you are boiling them in or cook them with sweeter vegetables like parsnips. Dandelion flowers can be added to salads, fried in batter as a fritter, and can also be used to make jams, jellies and even wine. The root can be used as a coffee substitute. 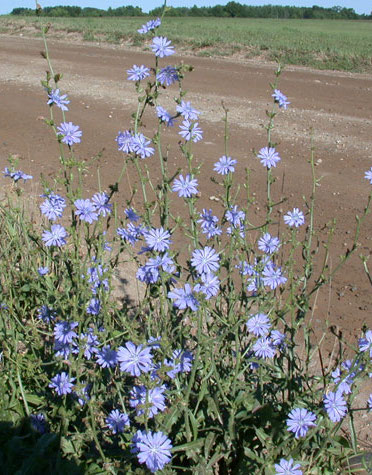 Chicory (Cichorium intybus) is also used as a coffee substitute throughout the world, and the leaves can be used in salads. Peel and trim the roots, then roast them at about 250 F for about 30 to 40 minutes. Allow the roots to cool and grind them in a coffee grinder using 1 teaspoon root to 1 cup of water. Brew it like coffee; it will be caffeine free.

Purslane (Portulaca oleracea) has red stems with succulent leaves. The flowers have five small, yellow heart shaped petals that can bloom any time of year in the morning. It has a slightly sour or salty taste sometimes described as lemony. It grows in mats like chickweed and can be eaten like spinach. It is also high in heart healthy omega 3 fatty acids, vitamins A and C and anti-oxidants. The leaves, stems and flowers can be eaten raw or boiled. 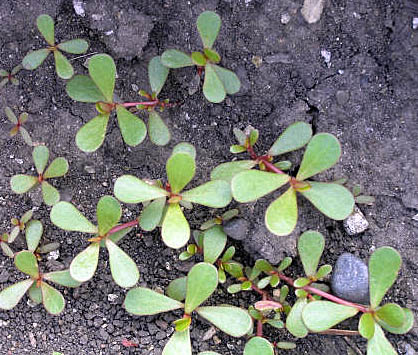 Plantain (Plantago major) has similar nutritional values to the dandelion. Broad leaves and seeded shoots that are 1 to 2 inches long are best eaten when they are young. The shoots are referred to as the poor man’s asparagus with a slight nutty taste. If you let the shoots grow longer and turn brown, the brown seeds are edible. Plantain contains 30 percent mucilage, and the roughage is soothing to the intestines.

Common Burdock (Arctium minus) has young leaves that form a rosette. Small seedlings can be used in salads, and young leaves, stems and roots can be eaten either raw or cooked. When mature, the leaves become triangular shaped with petioles and are dark green and toothed. The stems grow 3 to 6 feet tall. The tap root has a sweet taste and is edible after the husk has been peeled away. The pith can then be eaten as a vegetable and used in stir-fries. The root can also be roasted and used as a coffee substitute.

White Clover (Trifolium repens) is a prostrate and mat forming herbaceous perennial that can grow 4 to 6 inches tall and spreads about 12 inches wide. It has three leaflets on each stem and white blossoms. All parts of the clover plant are edible and can be eaten either cooked or raw. The flowers can be dried and used for tea, and young leaves can be used in salads or cooked and eaten like spinach. The flowers and the seed pods can be dried, ground up and used as flour or sprinkled on cooked foods. Dried clover leaves may be used to add vanilla flavoring to cakes. 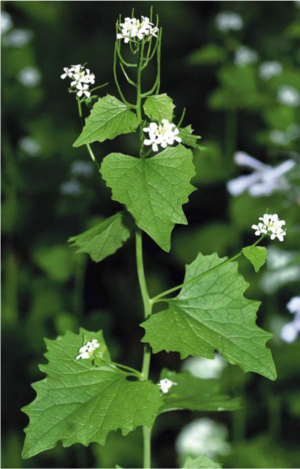 Garlic Mustard (Alliaria petiolata) is an herbaceous biennial flowering plant. It has round to heart shaped leaves that have jagged edges and cross-shaped white flowers with four petals. Every part of the garlic mustard plant is edible. The root smells like horseradish and can be used in soups and stews. The leaves can be chopped up and used in salads, sauces or pesto. The seeds may be used to season food.

Cattails (Typha latifolia) grow in marshy areas on tall green stems and have brown, soft flower heads. To eat them, just break off the flower heads during the last week of June and steam them for seven minutes. They taste like corn on the cob; just add butter, salt and pepper. They can also be blanched and frozen. The rhizomes, the horizontal root-like stems that send out roots and leaves, can be eaten in the fall and winter. Just peel and cook them like potatoes. They have a sweet flavor and can be eaten raw, baked, roasted or boiled. The pollen can be used as a flour substitute; it has a bright yellow or green color. When used in baking cookies, biscuits or pancakes, it turns them a yellow color. 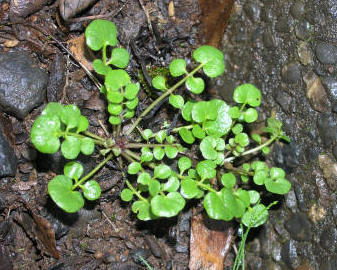 Hairy Bittercress (Cardamine hirsuta) is a low growing weed that has leaves that may be one-half inch to 1 inch long and that form a rosette shape. It has white flowers with four petals that form a cross and bloom in the spring. The hairy bittercress leaves are edible and very nutritious. They contain antioxidants, vitamin C, calcium, magnesium and beta-carotene. The leaves are not bitter but are mild and with a peppery taste. They make a tasty addition to salads, sandwiches or soups. The leaves wilt quickly so use them as soon as possible after you pull them.