By Ray Novitske, Fairfax Master Gardener
I first saw a Crocosmia years ago, blooming in a fall garden. It was a standout with its intense red blooms and arching stems. I had to have one. 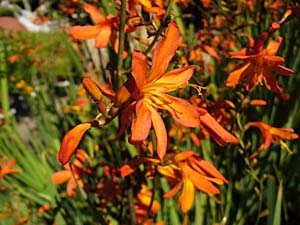 Crocosmia has several names — Falling Star, Coppertip, Tritonia, and Montbretia, named after a French botanist Antoine Francois Conquebert de Montbret. It was hybridized for French gardens in the 1800s, and soon afterwards by English gardeners. The name Crocosmia comes from Greek krokos (saffron) and osme (smell). It is reported that dried Crocosmia flowers soaked in water will release a fragrance similar to saffron.

It is a member of the Iris family, and native to the eastern cape of South Africa and Mozambique. The species Crocosmia aurea, has long narrow sword-shaped leaves like the Iris, and an arching stem containing a row of up to ten orange flowers.

The cultivated hybrid commonly found in home gardens is Crocosmia × crocosmiiflora. This plant is similar in appearance to the species, but sports larger flowers, more blooms, and a wider selection of colors: reds, oranges, yellows, and combinations. 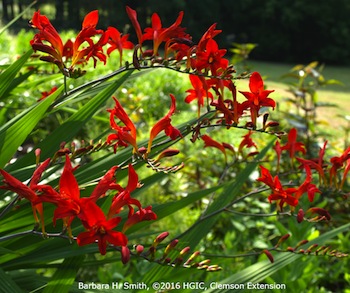 Crocosmia grows from corms, which are similar to bulbs in appearance, but Crocosmia can also be planted from seed. It survives winters in zone 5 or 6, so we do not have much problem here in our warmer zone 7. Crocosmia is easy to care for, and sources state it is deer resistant, too.

I have seen Crocosmia blooming at Green Spring Gardens, but you will need to search a little to find it in home gardens. It is more common in Europe where much of the plant breeding took place. Crocosmia can grow to four feet tall, but is usually found in two to three foot heights. Like iris, the vertical sword-shaped leaves are attractive by themselves when the