By Elaine Pugh, Fairfax Master Gardener
Crape myrtle bark scale (CMBS), a type of felt scale, is a serious threat to the crape myrtle, Lagerstroemia indica. The pest has now been found in the Virginia Beach area, and may reach Northern Virginia.

The crape myrtle is a commonly-used flowering, small-leafed, multi-trunked specimen tree or shrub in the South that comes in all sizes and shapes from a large vase-shaped tree to a small shrub. Profuse flowers in the summer are found in various shades of red, pink, white and lavender. The fall colors of yellow, orange or red add color to the landscape. Smooth, exfoliating bark also adds to its beauty in the winter to give it a four-season use in the landscape.

What is this pest?
The technical term for crape myrtle bark scale is Eriococcus lagerstroemiae, a type of invasive felt scale from Asia related to the azalea bark scale and oak eriococcin scale. According to the Mississippi State University Extension Office, adult females produce a white, felt-like sac around their bodies and lay approximately 100 to 300 pink eggs inside this sac. Eggs hatch into tiny pink crawlers, and the older nymphs are pink, gray or brown. Adult males, rarely seen, are winged and mobile. They can complete two to four generations per year in the Southeast. (Texas A&M University shows a chart of the generation cycles.) 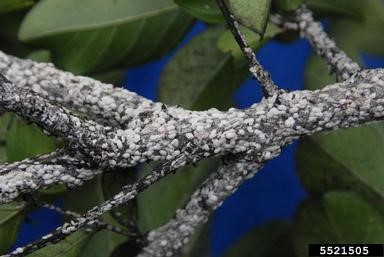 What does it look like on the tree?
Fluffy white and gray, tiny bumps with sooty mold are seen on the bark and twigs. Sooty mold is a black fungus that grows on honeydew, the excrement of aphids and scales. As compared to soft or hard scales, these scales feel like felt when touched. Pink blood-like fluid runs out when scales are crushed.

How does it spread?
Long distance infestation comes from unknowingly planting a purchased infected plant or by improperly removing a plant already infected. Once on a tree, the scale can spread by wind, or by crawlers in contact with birds, flying insects, small animals or people. Heavy infestations may also extend to the leaves and to nearby low-growing plants, grass and mulch. Once in an area, it spreads rapidly from tree to tree, even when trees are hundreds of feet apart.

Where did it come from and how fast is it spreading?
CMBS was first discovered on crape myrtle trees in the United Stat