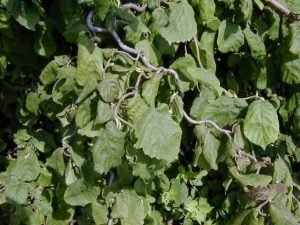 If you chose Harry Lauder’s walkingstick or contorted filbert, you are correct. Both are common names for this unusual and interesting deciduous small tree or large shrub distinguished by its gnarled and twisted stems, branches and twigs. Even the leaves curl. The twists and turns in its branches remind one of a corkscrew. It is also referred to as a corkscrew hazel.

A cultivar of the European filbert, Corylus avellana, the “contorted filbert” was discovered growing as a mutation in an English hedgerow in 1863. Although it was grown in Europe around the turn of the century, it did not receive much attention in the United States until the 1950’s.

Another curious fact about the contorted filbert is the derivation of its common name, Harry Lauder’s walkingstick. Sir Henry “Harry” Lauder (1870-1950) was an internationally famous, early twentieth-century Scottish entertainer. He frequently appeared in Scottish dress and carried a twisted and contorted walking stick, which, some say, came from this tree. The contorted filbert was named in his honor. 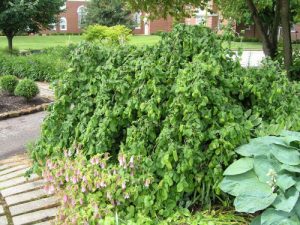 A slow-growing tree, the contorted filbert averages 8 to 10 feet in height and width. It has smooth, gray-brown bark on its gnarled and curled stems and branches that are somewhat pendulous. The roughly textured, ovate leaves have doubly serrated edges and are 2 to 4 inches long. In late winter, when this tree’s eye-catching structure stands out in the landscape, yellowish 2-inch male catkins droop gracefully on its small stems, providing further interest. The reddish female flowers are barely noticeable blooming just above the catkins.

The contorted filbert, a member of the birch family (Betulaceae), prefers moist, well-drained soil. It will grow in full-sun to part-shade conditions. Most cultivars are grafted onto root stock and any suckers that are produced should be removed. It is now possible to buy plants that are grown on their own root stock. It is hardy in zones 4 through 8.

While the contorted filbert is a cultivar of European filbert (Corylus avellane), which is often grown for its nuts, it does not produce nuts. Other notable plants in the Corylus genus include the American filbert (Corylus Americana), the Turkish filbert (Corylus colurna) and the Farges hazelnut (Corylus fargesii). The American filbert will colonize in a naturalized setting and provides valuable food for many animals. Within the genus Corylus, the common names filbert and hazel are used interchangeably. According to the Missouri Botanical Garden, hazel is more often used in reference to wild specimens while filbert refers more often to cultivated plants. 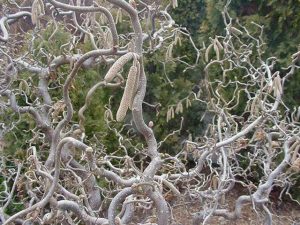 The contorted filbert reportedly does not have serious disease or insect problems and is said to have good resistance to Eastern filbert blight. Nonetheless, the tree should be monitored for the fungal cankers caused by the fungus and any infected areas should be pruned out.

Several years ago, I planted a contorted filbert in a prominent place in my garden along a path where it is easily noticed. It receives about four to six hours of sun a day in an area where the soil is often moist. I admire it in all seasons, but my favorite is in the late winter when the catkins droop in parallel on the tips of the gnarled branch twigs. Then one can really study the intricacies of its twists and turns. The contorted filbert is stunning in its late winter garb.