By Ann M. Mason, Fairfax Master Gardener Intern
Wind, fire and beetles assault trees and contribute to injury. In my yard, the limbs of oaks and hickories were injured by high winds, and one hangs limply about 50 feet up. (It is in the woods and not in a position to hit a house or any person. The arborist was not worried and suggested we do nothing.) Sadly, if we prune trees incorrectly, we can cause injury that can lead to tree decline. Within the gardening community, we say “People heal — trees seal.” Well, how do trees seal?

This article explores the science behind how trees seal, more accurately, wall off damage. Called Compartmentalization of Damage in Trees (CODIT), it is a fundamental process that we gardeners need to know a bit about. 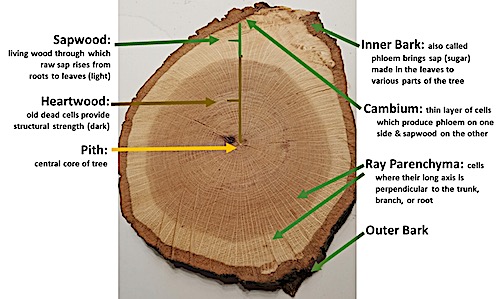 First, let us review tree structure. Starting from the outside to the center, trees have bark that protects them from outside factors and insects. Next is the inner bark or phloem, the short-lived pipeline moving sugars throughout the tree. Next is the actively growing cambium layer that produces new wood that becomes the phloem and bark. Sapwood is new living tissue called xylem that moves water from the roots to the leaf buds. As newer sapwood is laid down in rings, the older sapwood turns into heartwood, the dead tissue formed of hollow, cellulose fiber joined by lignin to provide the strength and support for the tree.

As gardeners, we often like to show and let children count the growth rings formed from the spring (light) and autumn (darker) bands of growth. If we look closely, we see that the cambium forms cells that are longitudinal (parallel) to the axis of the trunk, branch or root, and cells that are perpendicular to that axis. The perpendicular cells become parenchymal rays that partition the wood; the longitudinal cells fill the compartments between the rays.

With this background, we are ready to discuss how trees wall off wounding injury and the assault of invading microorganisms. In 1935, pathologist Dr. George H. Hepting reported that trees appeared to limit fungi and bacterial invasions after injury. After 16 plus years of research and dissection of thousands of trees around the world, Dr. Alex L. Shigo, along with colleagues Dr. Walter Shortle and others at the US Department of Agriculture, Forest Service, wrote extensively on the CODIT model. Their research found trees are highly compartmentalized and use their structure to respond to, i.e., wall off, injury. 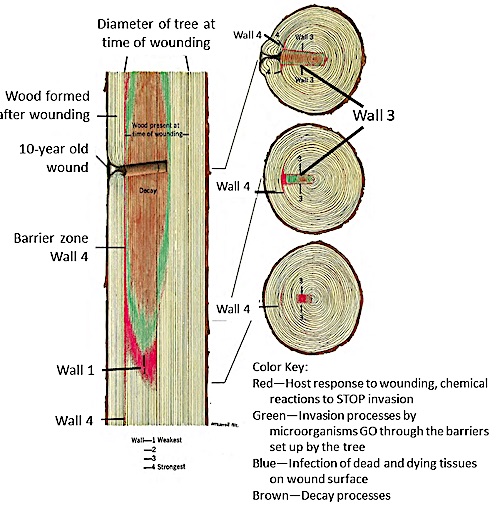 The CODIT model describes a four-part-response, wall formation, around injury. Wall 1 resists vertical infection when cells surrounding the liquid transporting tubes respond to plug them. Trees use a variety of mechanisms to create wall 1: cells balloon into the bore of the tube to plug the tubes; encrustations develop at the ends of the tubes; granular or crystalline material fill the tubes; pits between the tubes close; and air bubbles develop. Regardless of the cellular mechanism, the action plugs both ends of the vertical plumbing preventing the spread of infection as well as liquid movement. Thus, wall 1 acts as a roof and floor limiting the extent of vertical injury. Wall 2 is the annual growth ring and resists the inward spread of the infection. Wall 3 uses the cells in the tree’s parenchymal rays to resist the infection’s lateral spread. The ray parenchyma produces cells that are smaller and have chemicals (phenols, terpenes and others) to resist micro-organisms. After injury, the tree’s cambium continues to form growth rings to form wall 4, called the barrier zone, separating the wounded, infected wood from new wood.

Thus, CODIT describes the process trees use to form walls around wounding injury and the related assault of microorganisms, both fungi and bacteria, that threaten to destroy tree health.

Tree Injuries that Do Not Follow the CODIT Model

However, Dr. Sligo reports that there are at least three types of wounds that do not fit the CODIT model. First is wounding damage from sapsuckers and larger animals (beavers, porcupines). The tree coalesces the injuries to form a “palm” but the vertical response forms multiple wall 1’s to form a ”finger” pattern. Second is damage from canker rot fungi, which, once established, acts like a re-wounding process to keep the wound open, slowly killing the tree’s tissues around the wound. Third is the formation of a barrier zone (wall 4) far away from the wound, so the new ring growth pulls apart parallel to the growth rings (ring shake).

While tree injury from birds, beetles, fire and wind is beyond the gardeners’ action, proper pruning techniques can limit tree injury from gardeners. Pruning just outside of the branch collar and at a 45- to 60-degree angle to the branch bark ridge allows the tree’s walling mechanisms to work. Pruning that cuts into the branch collar, into the branch bark ridge, or leaves a branch stub leaves an open invitation to invading microorganisms. Pruning techniques are covered in Virginia Cooperative Extension Publication 430-455 and in another Fairfax Gardening article, “Why Do We Prune Deciduous Shrubs and Trees?”