By Joe Francis, Fairfax Master Gardener
Several years ago, we purchased a potted perennial at a fall season farmers market from a plantsman in rural central Virginia. We brought it home and planted it in our test garden. The selected spot is one that is the last area to lose moisture. The following year, it grew and gave the appearance in leaf and standard growth behavior that suggested it belonged in the Aster family. 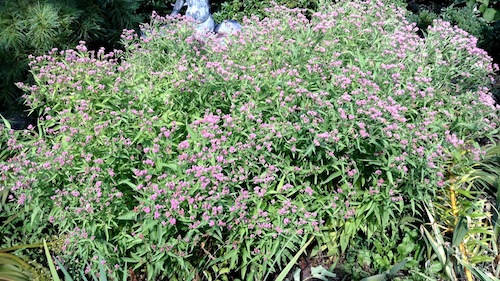 That fall, its growth of eight vertical stalks “bloomed.” The flower raceme brought forth a cluster of eight blossoms with their flowers emerged halfway outside of their retaining bracts. They retained that closed posture and had no evidence of any pollination activity. We later found that insects and moths are the pollinators. With dismay, we removed the flowering stalks after several weeks, their purple “flowers” yet tightly bound. This growing season, with its abundant and timely rainfall events, made this cultivar literally explode with growth about 250 percent greater than last year. It occupies about 6 square feet and tops out at 4 to 5 feet. We looked for its botanic origins.

Our search ended with success, after many false starts in a local nursery noted for its competence in plant identification. Our plant, Pluchea odorata, has an impressive array of common names: sweet scent, camphorwood, stinkweed, sour bushes and salt-marsh fleabane. The latter, by far, appears to be the most used in retail traffic. The other names are practical synonyms derived to describe its distinctive odor when its leaves are crushed. It is a native species herb that purports to provide relief from discomfort challenges within the female reproductive tract and is contraindicated for migraine suffers and during pregnancy. It is widely used in the Caribbean Islands. 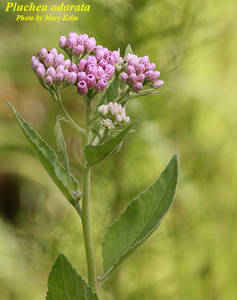 It is found along the edges of slow moving waterways in brackish or salty water. In situ it usually is 1 to 3 feet high and generally has dark pink flowers, but oc