By Elaine Homstad, Fairfax Master Gardener
I have been growing herbs in my garden for many, many years, and two years ago oregano and I came to an impasse. It had nothing at all to do with not liking this fragrant, flavorful, and easy-to-grow herb. It had everything to do with its exuberant nature. 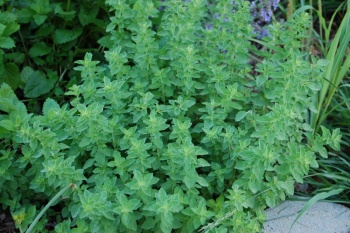 As gardeners, we live by (and preach to anyone who will listen) “right plant, right place.” My oregano showed me its true nature in what it considered the “right place.” One 3.5-inch pot of Origanum vulgare hirtum had taken over half of my herb garden. It wasn’t an overnight thing, but it certainly had become, over about a 6-year period, too much of a good thing.

Am I trying to warn you off growing oregano? Absolutely not! But understanding what a plant will truly do in that “right place” is as important as knowing how and where it will thrive.

Oregano (Origanum) is a plant from the mint family, Lamiaceae, which includes basil, oregano, marjoram, catnip, all the mints, rosemary, thyme, lavender, summer savory and sage. It has a wide variety of cultivars, and its uses can be culinary, medicinal and hygienic, as well as ornamental.

Marjoram and oregano are very closely related, with the difference being one of flavor. Marjoram has a sweeter taste, whereas oregano is more aromatic with a stronger, more pungent flavor. In fact, oregano is often referred to as “wild marjoram.” 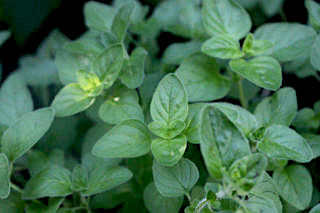 Oregano is very popular in Greek, Italian and Mediterranean cuisines. Its popularity in the United States was probably due to the return of soldiers from Europe after WWII, and the increase in Italian American cuisine as scores of immigrants were welcomed to this country. Oregano is often known as the “pizza herb.” Unlike many other herbs, oregano is one that is almost better used dried than fresh and drying it from your own garden is relatively simple. Both references listed below contain information about those methods.

Oregano is a perennial herb, hardy in Zones 5 to 10. The cultivation needs of oreganos are relatively simple. Like many other Mediterranean herbs, it prefers well-draining soil that has not been too enriched with compost or other amendments. It is a drought-tolerant plant that can suffer with too much moisture or a crowded and humid environment, which can lead to powdery mildew. It likes full sun, at least six hours of direct light. Depending on the cultivar, it can grow as a small mound 2 to 3 inches tall, a short plant with a 10-inch height or a very tall 39 inches. Many varieties will have a 2 to 3-foot spread, so if you want to keep it in ch