Is Milky Spore Losing Its Punch? 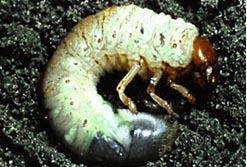 By Gil Medeiros, Fairfax Master Gardener Intern
Since the 1940s, homeowners have used Milky Spore to control Japanese beetles. The product is applied to the ground and gradually infects Japanese beetle grubs living there. Over a multiyear timeframe, Milky Spore eventually kills off the grubs, which means they cannot develop into adults. Control is achieved.

Milky Spore is the bacterium Paenibacillus popilliae. The strain that is commercially available to homeowners infects Japanese beetles and only Japanese beetles. Its properties have made it a treatment of choice for these insects because:

This strain of Milky Spore has no effect on other members of the Scarab beetle family, such as European chafers, that damage landscapes in some parts of the country.

Milky Spore was isolated, developed and tested in the 1940s in a U.S. Department of Agriculture program. Japanese beetles were running rampant in the eastern U.S. at the time, just 25 years or so after first appearing on this continent. The beetles were then considered to be a serious invasive pest with no natural predators, a threat to food crops and ornamental plants alike. In the 1940s and 1950s, Milky Spore was used extensively in the East, particularly in Pennsylvania and Ohio. It was credited with decreasing Japanese beetle populations by 90 to 95 percent. Ever since, Milky Spore has been regarded as an effective control for Japanese beetles.

In recent years, scientists have attempted to reproduce the results of the 1940s with no success. Infectiveness, a measure of how many insects in a population show signs of infection, dropped to about 39 to 44 percent in trials conducted in Kentucky. A Japanese beetle grub cannot be killed if it has not been infected. Recall that Milky Spore was thought to work at 90-to-95-percent control 60 years ago, implying that infectiveness was much higher than it is today.

What happened? No one knows for sure, but speculation is that Japanese beetle grubs in the 1940s’ trials may have been weakened by environment stresses related to extremely high population levels. It is possible, too, that the Milky Spore bacterium has evolved in a way that makes it less effective in controlling Japanese beetles. Or, perhaps, the Japanese beetles have gained immunity to Milky Spore over many generations; effectiveness of many insecticides has been similarly degraded by insect mutations. 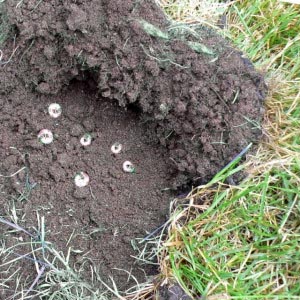 Grubs under a flap of soil.

No matter the mechanism of its demise, Milky Spore seems to have lost much of its punch.
What is a homeowner to do? At this time, Milky Spore is still recommended by the Virginia Pest Management Guide (PMG) as a control for Japanese beetles. However, a better option for organic control might be to treat the soil with parasitizing nematodes. These nematodes encounter the beetle grubs in the soil and lay eggs on the grubs. The nematode eggs hatch, and the young nematodes eat the host grub. The Virginia PMG recommends using the Heterorhabditis or the Steinernema nematode. The Kentucky Extension Service recommends the same. The Michigan Extension Service recommends using the Heterorhabditis nematode but not the Steinernema nematode.

Other options include synthetic insecticides. When contemplating the use of a synthetic insecticide, a homeowner should not guess about the presence of Japanese beetle grubs in the lawn. The decision to treat with an insecticide should be based upon a count of the number of grubs occupying 1 square foot of sod at the depth of about 1 to 2 inches. Chemical control is warranted when the count is six to 10 grubs per square foot; this is the threshold number above which grubs do serious damage to turfgrass.

These chemicals are best applied in June, July or August soon after Japanese beetle eggs have hatched in the ground and grubs are small and near the surface. When using any pesticide, remember that the label is the law. Follow the instructions on the label exactly as stated.

The best advice to homeowners who are reluctant to use biological or chemical controls is to maintain a healthy lawn by following fertilization, irrigation and mowing practices recommended by extension scientists. Thick, healthy turf resists insects, disease and weeds. For Virginia lawns, this publication is an excellent resource: Spring and Summer Lawn Management Considerations for Cool-season Turfgrasses.