The Leafy Wonder of Hostas

by Elaine Homstad, Fairfax Master Gardener
There is no doubt about the popularity of hostas in today’s gardens. Mostly distinguished by their striking foliage, these easy to grow, shade-tolerant, herbaceous perennials also display some interesting flowers and come in a wide range of sizes, shapes and colors. Indeed, entire gardens are lovingly dedicated to these fantastic plants. 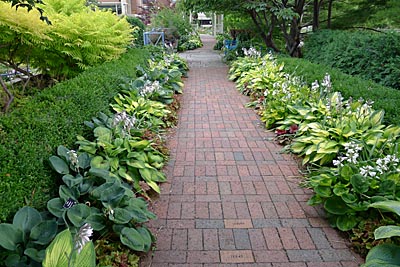 Native to Japan, China and Korea, hostas were first exported and grown in Europe in the late 18th century and named in 1812 by an Austrian botanist. By the 19th century, they had found their way to the United States, where they have enjoyed popularity ever since.

Hosta is both the common and the botanical name for these plants, though they are sometimes called plantain lilies and often considered the “queen of the shade of garden.” Nurseries today offer thousands of named cultivars. An affinity for moist, shady areas and a seeming lack of concern about competition from other roots make hostas ideal companions for large trees. With so many cultivars, the variety of sizes, shapes and colors is truly stunning, and the combinations of those varieties can result in a glorious display.

The not-for-profit American Hosta Society (AHA), which disseminates educational and scientific information about hostas, provides an excellent list of factors to consider when planting hostas -— one of which is plant size. AHS classifies hostas in five categories: miniature, small, medium, large and giant, described below according to clump size and leaf area.

Most hostas perform best in conditions that provide light to medium shade and well drained but moist soil that is rich in organic matter. They do well in USDA hardiness zones 3 through 8, and although some cultivars will do well in more sun, high temperatures will result in poor performance. Cultivars that have more gold coloration in the leaves tend to be more sun-tolerant, but will still benefit from shade protection in the afternoon.

While hostas love moisture, they do not tolerate wet, bog-like conditions which will cause the plants to rot. To prevent rotting, plant hostas in soil that drains well and is enriched with organic matter. During drought conditions, provide water at the ground level, not overhead, to ensure consistent moisture.

Unlike some other perennials, hostas do not need to be divided to ensure their health and vigor. They are most commonly divided to create more plants, or because the clumps, which spread by short rhizomes, have become too large for the space. Hostas between three and six years old are the ones that are most easily and successfully divided. Older and more mature clumps tend to be very dense, and it is more difficult to separate the crowns and roots without causing excess damage.

While the easiest time to divide hostas is in the early spring, when the crowns or “eyes” begin to emerge, doing so in late summer or early fall, when roots are in active development, is also an excellent time. Hostas are very forgiving plants; when divided and transplanted properly and given good aftercare, they are likely to thrive.

To divide hostas, dig up the clump and separate it into sections, either by pulling it apart or cutting the clump. The plant’s fleshy roots hold moisture and nutrients to help the transplants to establish. Providing adequate moisture to the new plants is very important to avoid transplant shock and encourage new roots. 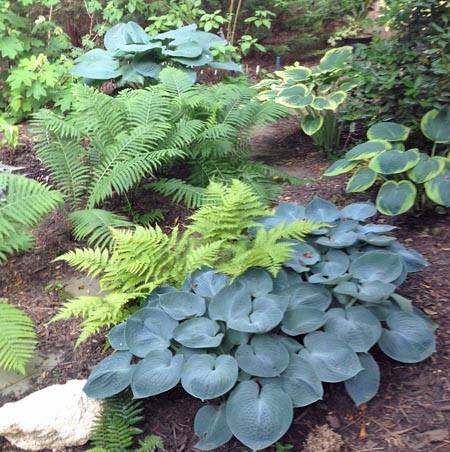 Hostas, prized primarily for their variety of foliage and texture, make an impressive display on their own. They can be planted in complimentary combinations of hostas. But mixing them with other shade-tolerant plants, can create a beautiful palate. Ferns, small irises, astilbes, thalictrum (meadow rue), goatsbeard, turtlehead, epimediums, cranesbills, daylilies and hardy begonias make great companions.

Hostas are popular not only because of their beauty and variety, but also because they are easy to grow and less likely to be affected by pests and diseases than many other plants. However, this does not mean that hostas are problem free. The lush succulent leaves and plump roots are a salad bar for a variety of garden visitors. These include slugs, snails, deer, voles and mice. (For methods to control some of these pests, see Outsmarting Wildlife Pests in Your Yard and Outsmarting Deer in the Landscape).

Occasionally, rabbits and squirrels will have a nibble or two, and dogs may dig up the plants, but this is relatively rare.

While pests and diseases do not overly bother hostas, there are some conditions that can cause problems: Diseases affecting hostas include the fungal diseases Anthracnose and Cercospera, which display as leaf spots, browning and dieback. Phytophthera will cause crown and root rot. Fusarium root and crown rot also affects hostas and comes into your landscape on infected nursery stock, so purchasing only healthy plants from reliable nurseries and growers is very important.