Lavender Brings the Mediterranean to Your Garden

By Marsha Goldberg, Fairfax Master Gardener
Whether your garden’s style is romantic or modern, lavender can and should fit right in. Lavender not only graces gardens with its sweet perfume and interesting foliage and texture, it attracts pollinators and other beneficial insects, repels moths when placed among your clothes, and adds flavor to foods such as teas, lemonade and custards. 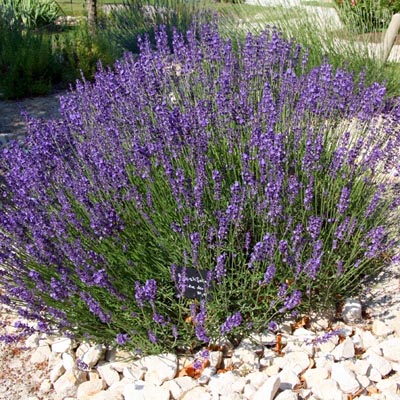 An herb that is member of the mint family (Lamiaceae), and the Lavandula genus, lavender includes more than 450 cultivars. Foliage color ranges from green to gray-green to silver, with some cultivars offering variegated leaves. Flowers come in a spectrum of blue, purple, white and pink. There are dwarf varieties but some lavenders can grow to more than 4 feet tall and wide.

Native to southern Europe and the Mediterranean region, lavender must have full sun and well-drained, alkaline soil, which isn’t found naturally in our region. To compensate for poor drainage, some people recommend creating a mound for planting; however, mounding may result in soil washing away and exposing plant roots. An easier method is to dig a good-sized hole and add an ample amount of gravel or an amendment, such as Perma-Till or Vole Bloc, mixed with compost. (Perma-Till and Vole Bloc resemble gravel but are made from volcanic rock and help provide drainage in heavy, clay soils. Both products are available at local nurseries.)

Once established, lavender is drought tolerant and needs very little water. If the plant was started in soil containing organic matter, such as compost, it will not need fertilizer; however, a small bit may help get new plants off to a good start. If you do use fertilizer, choose one that it is low in nitrogen. Too much will result in bushy plants with few flowers. Lavender grows best in soil that has a pH of 6.5-7.5. Plants will benefit from a small amount of lime and compost added in the fall. 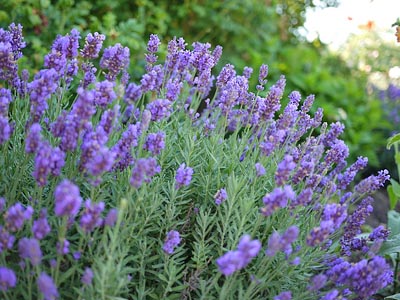 Lavender is neither aggressive nor invasive, and once established, is both deer and rabbit resistant. It works well with other drought-tolerant plants and herbs, but needs room to spread. Lavenders reach full size in about five years, so be sure to plan for your plant’s mature size.

Besides correct planting, another key for lavender success is proper pruning. Left on its own, lavender will quickly grow into a woody, scraggly plant with very little foliage and few flowers. Lavender is hard to rejuvenate at that stage, so avoid it by pruning the plants vigorously for the first two years. Lavender uses a lot of energy to produce blossoms; therefore, in the first year, prune off the first flush of flowers. Depending on the cultivar, you may get a second flush, which you should then prune off at the end of the season. In the second year, once the plant breaks dormancy, prune off all new growth. This will encourage more growth and flowers that you can enjoy until the end of the season, at which point you should prune the plant into a tight mound. Starting in the third year, trim the flowers and stems in the fall, cutting the plant back by at least one-third, but making sure to leave at least three sets of leaf nodes on each stem. Keeping plants compact will protect them in colder months and against snow and frost.

Choosing a cultivar will depend on your growing conditions, especially the cold hardiness zone and summer humidity. Because we live in an area with four seasons, hardy lavender such as Lavandula augustifolia and Lavandula x intermedia, which are the most widely grown, are good choices. Any cultivars within those species will be hardy, but among the types of L. augustifolia, ‘Buena Vista,’ ‘Folgate,’ ‘Imperial Gem,’ ‘Maillette,’ and “Royal Velvet” are especially able to withstand cold and return consistently. Among the L. intermedia types, the commonly seen ‘Grosso’ and ‘Provence’ stand up particularly well to our hot, humid summers, and they are highly fragrant, too.

Preferred fragrance may also be a consideration when choosing cultivars. For example, Lavandula augustifolia has a sweet, floral scent, while Lavandula x intermedia is more woodsy. Factors that affect fragrance include soil, moisture levels and plant age. Here is where visiting a local garden or arboretum can be helpful; see what lavenders they plant for hardiness and decide which flowers and fragrances you prefer.

You can propagate lavender by seeds or cutting, but seeds may not come true if the plant has cross-hybridized. You can get a duplicate of the parent plant by rooting hardwood or softwood cuttings.