Why The Holidays Are Green 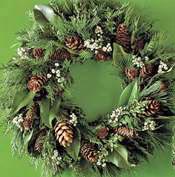 by Ray Novitske, Fairfax Master Gardener
Before green plastic decorations became popular, many people brought live greenery into their homes to celebrate the holidays. It freshened indoor air during winter months when people were shut in and often in close proximity to one another. But further back in time, bringing outdoor greenery in served other purposes, as well.

Some people believed evergreens had magical powers because they stayed green while other plants died in the winter. They believed the branches and vines of these perpetually green plants contained life and vigor and would ward off evil spirits present in howling winds and long, dark winter nights. In addition, they thought the greenery would keep away witches, ghosts, illness and death.

Decorating with greenery in December helped remind our ancestors of the coming spring and the return to life. In Europe, Druids adorned their temples with evergreen boughs in winter as a symbol of everlasting life. During the winter solstice, Egyptians decorated with palms as a tribute to the sun god, Ra. The palms symbolized a stronger sun, as well as the return of spring, agriculture and green plants — the triumph of life over death.

The tradition of bringing pine trees indoors for Christmas, many believe, began in Germany. Legend has it that Martin Luther was wonderstruck by evergreens sparkling in starlight. He recreated the scene for his family by hauling an evergreen tree indoors and lighting it with candles. Later, others adopted the idea, decorating the trees with tinsel, cookies and strings of fruits and nuts.