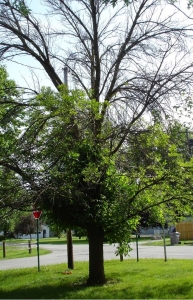 By Pat Dickey, Fairfax Master Gardener
Ash trees in Fairfax County are steadily becoming the victims of an exotic pest, the Emerald Ash Borer. “The Emerald Ash Borer can now be found in all areas of the county, and we are no longer conducting any monitoring/trapping activities,” says Troy Shaw, chief of the county’s office of Forest Pest Management. “Unfortunately, we are starting to see severe ash mortality, and our efforts have shifted from monitoring to education in terms of treatment options.”

History of the infestation

In 2002, the Emerald Ash Borer was accidentally introduced into North America on shipments from Asia. The pest does not travel great distances on its own and is typically spread when ash materials, such as nursery stock, firewood and wood chips are transported from infested areas. It was first spotted in Fairfax County at Wolf Trap but was eradicated in 2005, according to Adria Bordas, Senior County Extension Agent. Frank Finch, a county Urban Forester, says the Emerald Ash Borer was again discovered in the county in 2008, and the county became a cooperator with the US Department of Agriculture and the Virginia Department of Agriculture and Consumer Services. An extensive trapping program was initiated to monitor the spread of the borer throughout the county and state. By 2012, the Emerald