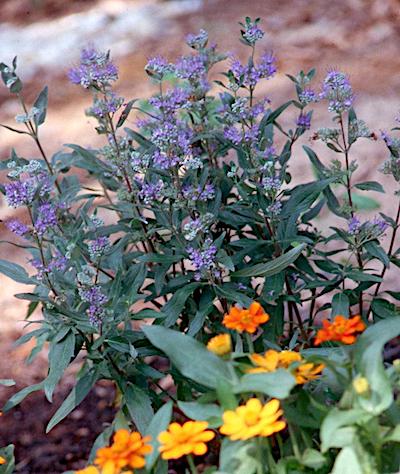 It is often said that plants with flowers in blue shades can be rare and hard to find. Blue can be a wonderful addition to almost any garden palette. But this plant is special to me because of its ability to attract pollinators. The hub of activity as nature puts on a show tops anything on television.

It does require you to wait until late summer for its blooms, but they are definitely worth it.

What is this plant? It is Caryopteris, also known as Bluebeard or Blue Mist. Caryopteris x clandonensis is a genus of woody flowering shrubs in the family Lamiaceae, the mints, which include many aromatic herbs and plants.

However, you may also find it classified in the Verbenaceae family at some sources.

Caryopteris is native to China and eastern Asian countries, and its hybrids enjoy growing in USDA zones 5 to 9. It is a small woody perennial shrub with grey/green leaves that grows to a 2- to 4-foot spread. It prefers less rich soil, with a middle pH range of 6 to 8, as long as it is well-drained. Once established, it can handle drought conditions. It does prefer full sun, six or more hours per day, but will also bloom in partial shade conditions, though not so profusely. 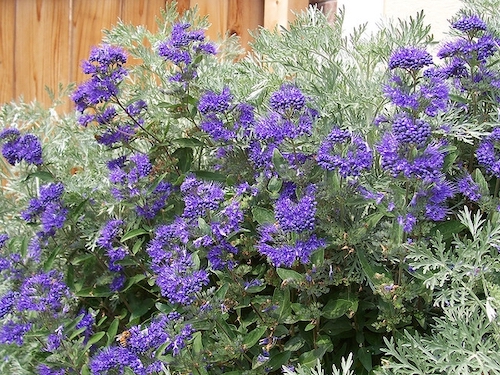 Its blooms are in clusters known as cymes that spread out along the upper part of the slender, graceful stems of the plant. The buds in the cymes open to small feathery puffs, leading to the common name of Blue Mist or Blue Spirea. However, Caryopteris is not related to Spirea. Its bloom time is late summer, for a period of several weeks. During this time, it is likely to be covered with active pollinators; many types of bees, butterflies and moths are attracted to it.

Caryopteris can be planted in the spring or the fall. As with all newly planted specimens, it should be watered regularly but conservatively in its first year. Once established, it will adapt readily to periods of dryness, making it an ideal plant for xeriscaping. It can also handle rainy periods, as long as the spot where it is planted can drain. Because of the open nature of its growth habit and its smaller leaves, it is not prone to the powdery mildew that can affect other more densely foliaged plants during hot humid periods.

There are no significant pests or diseases that affect Caryopteris. Its leaves also produce an aroma similar to eucalyptus, which deer do not like. The blooms themselves have a very light sweet fragrance, which seems more noticeable to the insect pollinators than to humans. 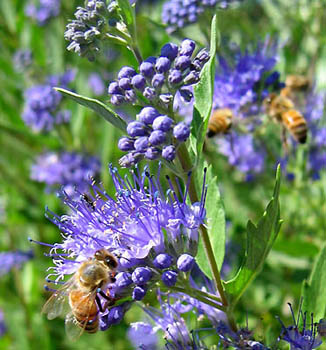 Caryopteris, similar but not related to Buddleia, needs to be cut back in the late winter/early spring. It blooms on new wood, so pruning it back prior to when it begins to grow and leaf out in the April and May time period ensures those profuse blooms come July and August. Unlike Buddleia, it does not aggressively spread. Caryopteris can be cultivated from seeds or softwood cuttings.

While most Caryopteris flower in shades of light to darker blue, there are also purple, pink and even white varieties. Foliage can also vary from the more typical grey/green to variegated yellow/green or even a bright gold color. Some of the most available cultivars include ‘Longwood Blue’ ‘Blue Mist’ ‘Dark Knight’ and ‘Heavenly Blue.’

Consider adding this plant to your garden. The show it puts on is worth the wait.