By Ray Novitske, Fairfax Master Gardener
Admit it. You saw the title and thought of parasites found in books and were intrigued. But first off, booklice are not true parasitic lice but are very small insects of the psocid family. They are generally only 1 mm in length (less than 1/16 of an inch), brown or pale in color, and (you can breathe easier now) they do not harm plants or people. Someone thought it was a good idea to describe them as lice. 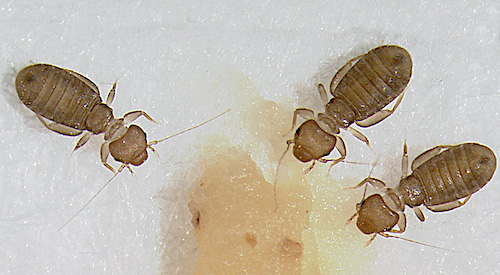 Booklice have bulbous heads with large eyes and long legs and antennae. They are different from barklice, the type of pscocid that are found on trees, in that they are wingless. Booklice are usually found indoors, while barklice have wings and inhabit the outdoors.

Booklice like to live where warm temperature and humidity levels promote growth of their favorite food — mold and fungus spores. They prefer undisturbed books, paper, fabrics, cardboard and other materials that contain starches, and damp areas where molds, yeast, and fungi flourish. They are also known to inhabit areas behind wallpaper in kitchens and bathrooms where starchy paste and molds often grow in a moist environment. We can occasionally find them in areas around potted plants sitting on kitchen windowsills.

However, booklice are also known to infest grains and cereals stored in your kitchen pantry if it is not a dry environment. They contaminate the foods with their large populations, molting and excrement. Booklice are harmless and do not bite humans, transmit disease or damage food crops, but they are an annoying nuisance. The can infest food but are not poisonous and do not cause medical problems if contaminated food is accidentally eaten. But if found in food, they usually indicate that the food contains mold. 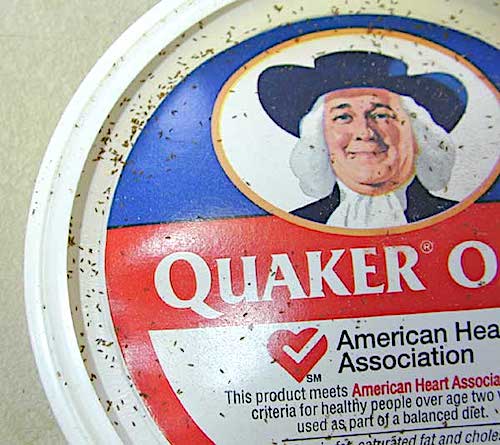 Booklice develop from eggs that hatch into nymphs and grow into adults in about 30 days. Females can lay bout 60 eggs, so populations can increase quickly. They can molt three to four times before reaching adulthood.

Eliminating booklice is easy by simply reducing humidity and eliminating mold. They can thrive in damp moist areas where mold is present — they simply do not survive when humidity levels are below 45 to 50 percent. Prevention is the best way to control them. Store food in sealed containers and keep dry and reduce humidity levels in the home. Dehumidify basements and exhaust excess moisture from bathrooms. Use bleaches to kill mold and fungi growing on surfaces in your home or hire professionals to decontaminate.

Pesticides and insecticides are not necessary for control of booklice. In fact, use of these chemicals and materials may cause more harm to humans and be more dangerous than the booklice. And, most products available to the public are not effective against psocids. The single most effective way to eliminate booklice is to reduce the humidity.

The presence of booklice means you have trouble with mold or moisture. If you solve the moisture problem, you take care of the booklice.