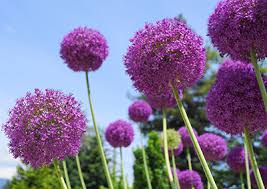 Mention spring blooms, and most of us think of early crocus, daffodils and tulips. But there are other spring bulbs that are often overlooked because they bloom later in the season. Alliums, also called Flowering Onions, can take your spring flowering season from the end of the tulips into the early summer. Most bloom in late spring through June.

Alliums are members of the Amarylidaceae family, which includes amaryllis, leeks, scallions, leeks, chives and of course, onions. There are about 600 different species of alliums, and most of them are native to North America, with the remaining hundred or so occurring in China. A handful are also found in Europe, Africa and Asia. 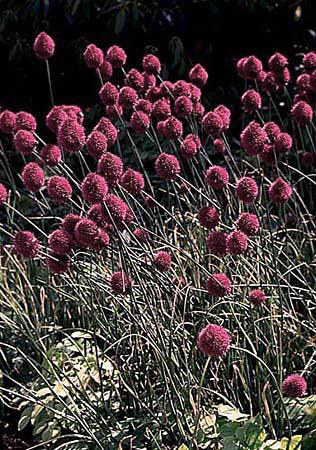 Alliums are fall-planted bulbs that produce a cluster of flowers on a sturdy stem, varying in height from a few inches to a few feet. They need full sun and average, well-drained soil, and have few problems. Deer and rodents leave them alone because of their onion taste.

After blooming, the foliage eventually dies back like tulips and daffodils, leaving the dormant bulb underground until ready to produce a new bloom the following year. Alliums need a warm period after blooming to replenish the food in the bulb for the next year, in addition to a cold period during winter. They also do not survive well in poorly-drained soil — not needing frequent watering. Some consider them to be drought-tolerant.

One of the best known alliums is the giant Allium giganteum, a native of central Asia. Its ball of lilac blue flowers appearing in June can measure 6 inches in diameter on stalks that are 3 to 5 feet tall. This tall variety can be damaged by high winds, so staking may be necessary. 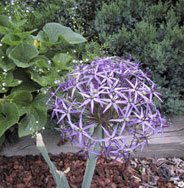 The drumstick allium (Allium sphaerocephalon) blooms later and displays flowers that are a bit smaller but just as showy. Their egg-shaped flower heads resemble drumsticks on 2-foot-high stems. This heirloom dates back to the 1600s and is native to Europe and western Asia.

The earlier blooming allium ‘Globemaster’ is a new introduction with large 8 to 10 inch silver purple flower clusters. The shorter 24-inch-high stems and sturdiness allow the flowers to remain upright. 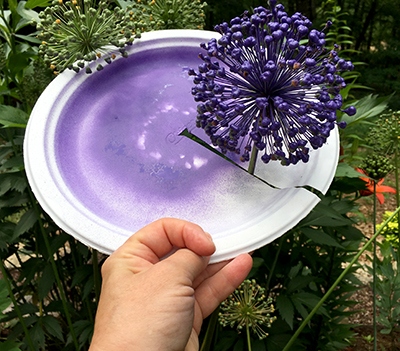 Allium cristophii ‘Star of Persia’ produces a pale purple flower cluster on short stems. The flowers are less dense, creating a geodesic dome or sparkler appearance and are even larger than giganteum. Although not grown for its display, small garlic chives (Allium tuberosum) bloom in the fall with pure white flowers when some bees are looking for blooms. Plant these for the pollinators and for your cooking. But beware — my experience is that they love to spread and multiply.

Once flowers are finished, some crafty gardeners have taken to spray painting the seed stalks to continue appreciating their show. A can of spray paint and a dried flower head can create a striking fireworks-like sculpture to display through the summer. And if stiff enough, you can cut them off at the base, spray them, and insert them back into the ground in the locations where you want them. 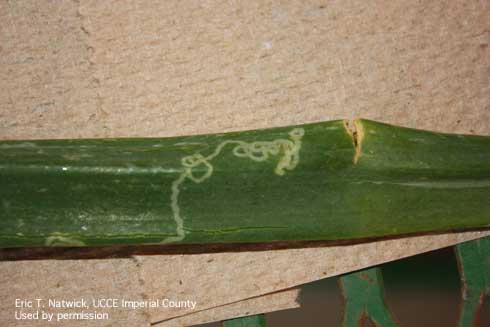 There is one new pest that attacks alliums and members of the onion family. In 2015, the allium leaf miner (or onion leaf miner) was found in Pennsylvania. This is the first time it has been spotted in the Western Hemisphere. Leeks seem to be the most attractive to this insect, but all members of the allium family are affected. The adult fly lays its eggs (two generations per year) and produces stippling puncture marks on the leaves. The larvae hatch and burrow into the leaves, leaving their tell-tale curving lines in them, and work their way down into the bulbs. The puncture points serve as entry points to bacterial and fungal infections. Spinosid has been recommended as an insecticide for control.

Low maintenance and deer resistant flowers are hard to come by. If searching for showy, attention-getting blossoms that appear after the spring blooms and before the perennials come out, consider planting some alliums this fall.