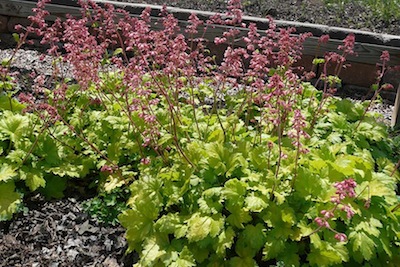 Coral Bells (Heuchera) is a native perennial of Virginia as well as much of the United States. Its name gives you the impression that the flowers in their bell shape are the focus of this plant. However, it is the foliage that is the star attraction, brightening the shadiest areas of the landscape with its colorful red, purple, silver, bronze, green and marbled and patterned leaves.

Heuchera is a member of the Saxifragraceae family, named for plants with tiny flowers and suited for planting in rocky areas. It has been cultivated since the 16th century and was given its Latin name by Carl Linneas, the nomenclature botanist, in honor of Johann Heinrich Von Heucher, an 18th century German botanist and professor of medicine.

There are two native species of Heuchera from Virginia, Heuchera americana and Heuchera villosa, although there are 36 species throughout the United States, mainly in the West. H. americana has medium-sized palmately-lobed leaves with scalloped margins. H villosa has larger, “hairy”, angular leaves. In the early days, it was called Hairy Alumroot and its roots were used as an antiseptic and for other medicinal purposes.

Heuchera is a low maintenance, evergreen perennial that has multi-season interest. Its foliage emerges in the spring with its most dramatic and darker color, and a second flush of leaves appears in late summer that is more subdued. The foliage can grow from 6 in. to 18 in. tall. The air temperature must be mild for the Heuchera’s foliage to look its best. Freezing temperatures will cause the leaves to lie flat on the ground. There is also discoloration and burning of the leaves during harsh winters. You should remove any winter-damaged foliage in early spring. Add a thin layer of compost and a small amount of mulch around the plants to control any weeds.

In the Mid-Atlantic states, Heuchera cannot tolerate being planted in full sun. The foliage will not be attractive, growth will be stunted and the color will be different than expected. Space the plants 1 to 2 feet apart in well-drained average garden soil. Make sure plants receive 1 inch of water per week during the summer, including rainfall. The pink, coral, red or white floral inflorescences will reach 24 inches. Deadhead them after their blooms fade.

Heuchera can contract a few pests and diseases, but they can be prevented with proper care. Japanese beetles can be controlled by collecting them by hand. Also, plant Heuchera away from the lawn area where grubs will be. If you see leaf spots, remove any affected leaves; it is not life-threatening. Stem rot can be caused by overly wet soil and an overabundance of rainfall. Amend the soil when this is a problem to help with drainage. Heuchera will tolerate some dry soil but will not grow as large. 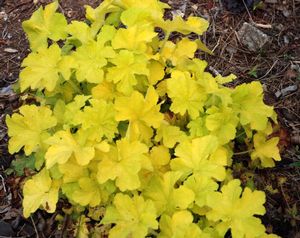 In the 1990s, a heightened interest in Heuchera began when breeders began to create varieties of Heuchera with different colored and textured leaves. The frenzy became so great that Mt. Cuba Research Center in Delaware decided to do a three-year study of Heuchera completed in 2014 to determine the best cultivars among the 83 that were then available on the market. With so many cultivars being released, some proved to be inferior or redundant. Here are some of the top ten cultivars from this study. They were evaluated for vigor, bloom time, flower color, sun tolerance, and pest and disease resistance. The size of plants listed are after the three-year study. 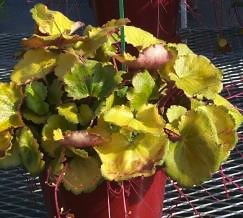 H. ‘Citronelle’ — electric-yellow fuzzy leaves; 14 in. high and 30 in. wide; blooms early July to mid-August; must receive shade all day long or foliage will fade

H. villosa ‘Bronze Wave’ — large, thick, glossy and angular leaves; 18 in. high and 38 in. wide; blooms late June to mid-August; up to 60 white inflorescences on each plant; easy care 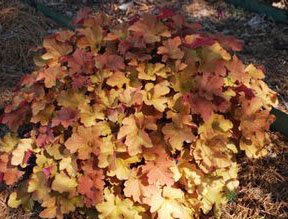 H. ‘Frosted Violet’ — purple with silver highlights; 14 in. high and 34 in. wide; blackish veins; leaves have a bluish-green cast in summer, a metallic sheen; bloom mid-June to late July; flowers fade from pink to white then green at different times, creating a confetti appearance